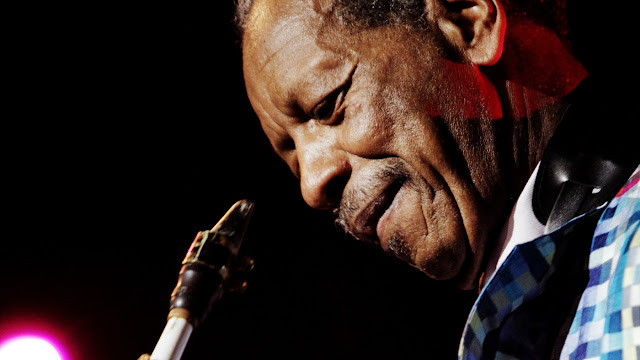 was born in 1930 in Fort Worth, Texas, where he was also raised. He attended I.M. Terrell High School, where he participated in the band until he was dismissed for improvising during "The Washington Post.

In the list of jazz innovators, Coleman belongs alongside Armstrong, Parker, Gillespie, Davis, and Coltrane. A softly spoken gentle-man, he has passionate, vocal intensity in his playing that connects directly back to the African-American race consciousness described by Henry F. Gilbert in 1917, and which owes much of his upbringing in the deeply segregated town of Fort Worth, Texas in the 1930s and 1940s.

During this period, it was still believed that to touch the head of a black man brought good luck, and Southern whites would think nothing of walking up to even the best dressed black citizen, lifting his hat, and rubbing his head.

Ornette Coleman was saxophonist with The Fabulous Paul Bley Quintet that recorded the album, "Live at the Hillcrest Club 1958 " with Cherry, trumpeter, drummer, Billy Higgins, and bassist, Charlie Haden

and released on the Inner City label in 1976.

1959 was a notably productive year for Coleman. His last release on Contemporary was Tomorrow Is the Question!, a quartet album, with Shelly Manne on drums, and excluding the piano, which he would not use again until the 1990s. Ornette Colman brought together a group of his important collaborators including double bassist, Charlie Haden with Cherry and Higgins

Coleman's music is deeply rooted in the soulful blues, country fiddling, and rhythmic dancing that were his community's natural defenses against such entrenched indignities.

Any conversation with Mr. Coleman about his work is likely to focus on his theory of "harmologics" Ornette Coleman..."There's a theory I have, that if you write a C, then you put a difficult clef sign in front of it, it changes to four other notes, depending on whether it's a bass, tenor, or treble clef. If you hear another note, you can substitute that one for the original, since the idea of the melody is already set".
Ornette Coleman was saxophonist with The Fabulous Paul Bley Quintet that recorded the album, "Live at the Hilcrest Club 1958 " with jazz musicians, Cherry, trumpeter, drummer, Billy Higgins, and bassist, Charlie Haden and released on the Inner City label in 1976.

The album is notable as being the first live recording of Ornette Coleman, made shortly after he recorded his first album, Something Else!!!! and featuring the group (without Bley) that would soon record the classic Atlantic albums The Shape of Jazz to Come (1959) and Change of the Century (1960).

SAMPLE - Ornette Coleman - This is Our Music

Ornette Coleman continued to push the envelope of jazz and radically different musical cultures. An increasing number of his compositions, while not ubiquitous, have become minor jazz standards, including "Lonely Woman", "Peace", "Turnaround", "When Will the Blues Leave

" and "I've Waited All My Life

". He has influenced virtually every saxophonist of a modern disposition, and nearly every such jazz musician, of the generation that followed him

On May 1, 2010, he was awarded an honorary doctorate in music from the University of Michigan for his musical contributions. Coleman died of a cardiac arrest at the age of 85 in New York City on June 11, 2015. His funeral was a three-hour event with performances and speeches by several of his collaborators and contemporaries