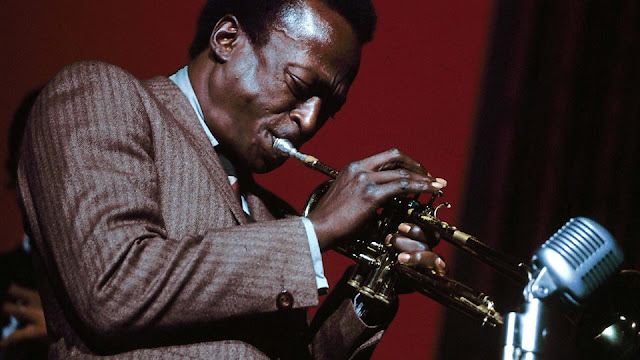 Miles Dewey Davis III was born May 26, 1926, in Illinois. He remains one of the most colorful musical shape-shifter personalities in the jazz community.

Traditionally, historians have focused on three distinct areas of Miles' work. His music had far-reaching effects on the overall course of jazz and it's development. Some will say that his Birth of the Cool nonet sessions from 1949, in which he, Gil Evans, Gerry Mulligan, John Lewis, and Johnny Carisi widened the field with a new way of writing for medium-sized forces.

His and Evans subsequent orchestral collaborations produced Sketches of Spain and the Porgy and Bess suite. Miles Davis' new jazz model was evident in his sextet of 1958-1960, which recorded Kind of Blue

deserves equal attention for his 1960s quintet with Herbie Handcock

, Ron Carter, Tony Williams, and Wayne Shorter. New relationships would begin between rhythm section and soloist. This included a radical reassessment of the role of time signatures and their relationship to the harmonies of jazz.

In the period after "Kind of Blue

", Miles Davis's band underwent some major changes. The band welcomed a new jazz musician, Wayne Shorter. The rhythm section began to tackle time in a
different way from earlier bands. The young and free-spirited Tony Williams would often enter into a musical dialog with Davis's trumpet. This brought a new approach to the concept of the rhythm section.

In Wayne Shorter, he had a passionate, technically advanced tenorist who took the band in a different direction from Coltrane, but he also had a composer of skill and ability, who had already proved his credentials as Art Blakey's music director in the Jazz Messengers

Davis was absent from the stage, largely through illness, from 1975 until 1980. When he returned, there was more a "pop" feel to his work. Albums such as "The Man With The Golden Horn", and "We Want Miles", showed him finding the definitive style of his final decade.