Abdullah Ibrahim played piano in the Jazz Epistles band, which was the first ever band of all black South African musicians 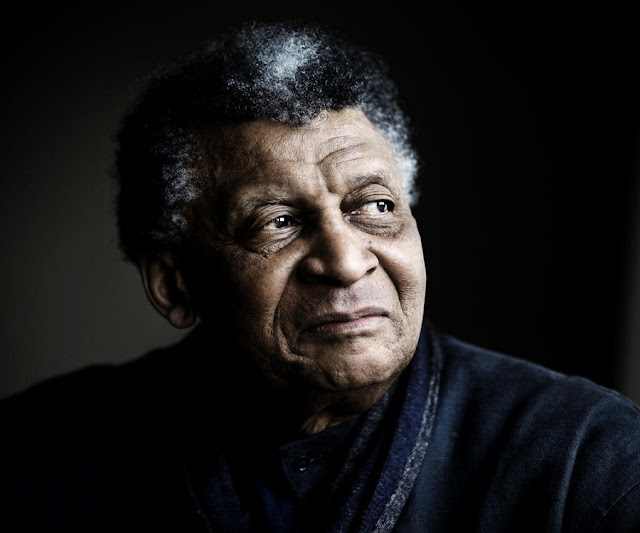 band, which was the first ever band of all black South African musicians. He was born in Cape Town on 9 October 1934, and was baptized Adolph Johannes Music grew with him as did puberty Abdullah began piano lessons at the ripe age of six.

He attended Trafalgar High School in Cape Town's District Six. He was already performing before crowds because, at the age of 15, he made his professional debut. Like many, he was considered "colored" because he was of a mixed-race heritage according to the South African government
Ibrahim moved to Europe in 1962. In February 1963, with his wife-to-be, Sathima Bea Benjamin. They married in 1965.

While in Europe, Duke Ellington

helped set up a recording session with Reprise Records: Duke Ellington Presents The Dollar Brand Trio. A second recording of the trio (also with Ellington and Billy Strayhorn on piano) performing with Sathima

as vocalist was recorded, but remained unreleased until 1996 (A Morning in Paris

Ibrahim and Benjamin moved to New York in 1965 and that year he played at the Newport Jazz Festival, followed by a first tour through the US; in 1966 Ibrahim substituted for Duke Ellington

As the Black Power movement developed in the 1960s and 1970s, it influenced a number of Ibrahim's friends and collaborators, who began to see their music as a form of cultural nationalism. Ibrahim, in turn, felt that the rhythm, sound, and culture of Afrika must be included as elements of his jazz
You can see in the expression on his face, the words in Boz Scaggs


..."You watch a few go down to the fire or the rope
You leave little to chance and nothing to hope".

After converting to the Muslim faith in 1968, Abdullah Ibrahim

returned to South Africa.
The South African Music Lifetime Achievement Award, given by the Recording Industry of South Africa, was presented to Abdullah Ibrahim in a ceremony at the Sun City Superbowl.

In 2009, for his solo piano album Senzo he received the "Best Male Artist" award at the 15th Annual MTN South African Music Awards.

Abdullah Ibrahim - The Song Is My Story

In 2009, the University of the Witwatersrand, Johannesburg, conferred on him an Honorary Doctorate of Music. Also in 2009, he was awarded South Africa's national honor the Order of Ikhamanga (Silver), "For his excellent contribution to the arts, putting South Africa on the international map and his fight against racism and apartheid."

In July 2017, he was honored with the German Jazz Trophy